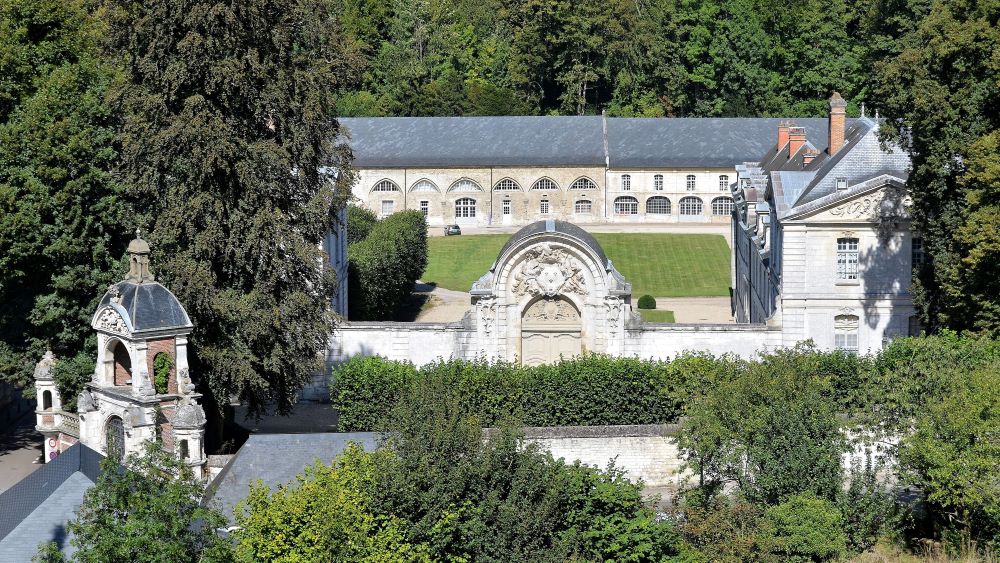 Eager to write in calm and contemplation, Patrick Leigh Fermor sought hospitality from the St. Wandrille Abbey. He did not follow the rule there, but assisted at the offices and of course respected the strict schedules of the Benedictine discipline.

The beginnings were difficult: “The abbey was pretty much asleep, but it seemed ridiculously early, around the time my friends in Paris (who I suddenly missed terribly) were wondering where to dine. After finishing a flask of Calvados bought in Rouen, I took a seat at my table, overwhelmed by depression and acedia. Looking around at the white box of my cell, I was suffering from what Pascal called the cause of all human ailments.”

Weeks go by and Fermor is introduced to this special world. He can speak to certain monks, those who are not bound by the rule of silence because of their functions: “I found among them no trace of obscurantism, no shadow of necropolis, no hint of bigotry, much less this overwhelming joviality which is such an embarrassing trait of many English clergymen.”

“There was no doubt about the respect they had for the purpose of their lives; but their company evoked that of any civilized and well-behaved Frenchman, endowed with all the balance, erudition and wit expected, the only difference being a gentleness, an absence of haste and a quietude which are the prerogative of the whole community.”

Beyond his personal impressions, the author quickly tells us the tormented history of St. Wandrille and other Western abbeys, ravaged by multiple successive catastrophes: the Hundred Years War, the Huguenot abuses, the Revolution, and sometimes the relaxation of rules and customs. They rise often, not always, and the ruins that remain are precious witnesses.

But one has to leave, after months of monastic life, and the sadness is even greater: “The abbey was first a cemetery; the outside world then seemed, by contrast, a hell of noise and vulgarity entirely populated by thugs, whores, and pirates. On the train back to Paris, even the window advertisements for Byrrh and Cinzano, usually such radiant emblems of freedom and flight, bore personal insults.”

After St. Wandrille, Fermor takes us to Solesmes and then to La Grande Trappe with the same literary brilliance and the same depth.

The end of this little book, written in 1957, is a vibrant tribute to the rock monasteries of Cappadocia. Wonderful churches and small almost buried monasteries nestle there, emptied of their monks for centuries, but still there. All the secrets are not known and yet “it was the landscape of the original Christendom that surrounded us.”

Patrick Leigh Fermor (1915-2011) was an institution in England. Hero of the Second World War (he kidnapped a German general in Crete), high-flying writer-traveler (on Greece in particular), his remarkable style earned him a well-deserved success.

Do not be afraid of these monastic visits, Fermor knows how to make them fascinating, with his finesse and his sober humor. An unexpected trip that we do not regret.