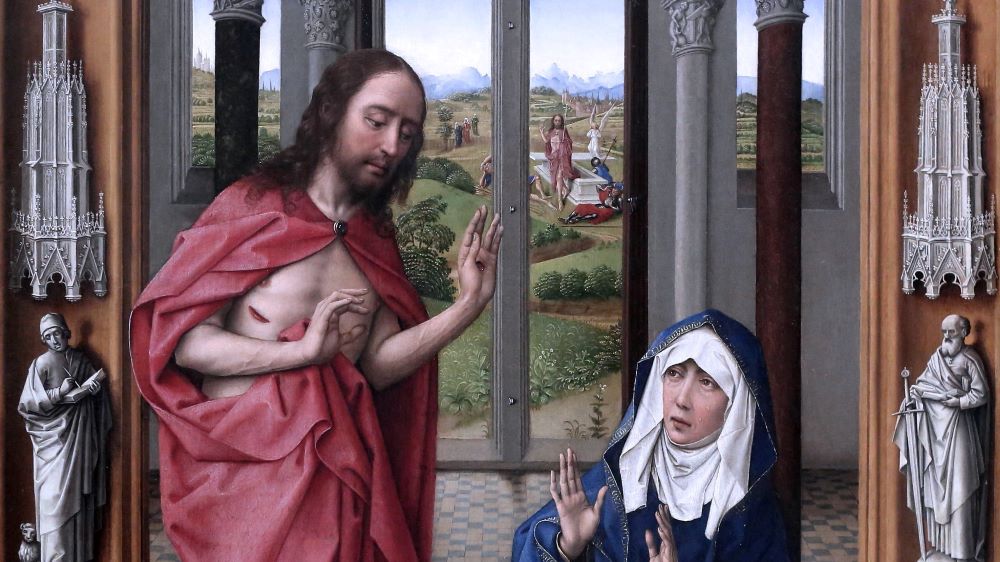 The heart-breaking embrace of death, when the sorrowful Mother pressed the broken and lifeless Body of her Son against her sorrowful heart, is now succeeded by the sweetest embrace of life: the Virgin Mother clasps her Son, resplendent with a new and imperishable glory, against her heart.

The terrible vision of that bloody face in the “Ecce Homo” scene is followed by the ecstatic vision of that other brilliant apparition: “Behold the God-Man – Jesus risen!”

How beautiful this divine face must have seemed to Mary, and even more so because of the contrast with the other tragic and unforgettable vision!

Indeed, she could never separate these two pictures, for both were part of what had been her Son’s condition: He had been “a worm, not a man, the reproach of men, the scum of the people”. (Ps 21:7) Now the “fairest among the sons of men” (Ps 44:3) had returned, as before the Passion, and even more so, for He had resurrected Himself to the impassibility of glory.

It is understandable that the pious women prostrated themselves on the ground and only dared to kiss His divine feet: “They came and clasped His feet and adored Him.” (Mt 28:9).

It is understandable that Jesus held back and imposed a temporary renunciation on the pure and overflowing affection of Mary Magdalene who would have liked to remain always at His feet: “Do not touch me!” (John 20:17).

But in this meeting of Jesus and Mary, it is the most tender and complete embrace, the most filial and maternal.

Not that the Virgin Mary did not see herself as infinitely small before Jesus, as a creature before her Creator, but, nevertheless, this divine glorious Body had been formed in her. Jesus was born of her, and her infinite littleness contained, in fact, a title of superiority over Jesus: that of mother over son. Only she, of all the mothers on earth, could now repeat in the embrace with her Son: “My beloved Son” in the strict and full sense of the word.

Her gentle Son, Whom she had tried in vain to soothe and embrace during His agony on the Cross, Whom she had contemplated stiffly on her knees, could now embrace her again, after the terrible ordeal.

Compared to Mary Magdalene, Our Lady was no less full of affection for Jesus.

But unlike Mary Magdalene, there was nothing impulsive in her heart, nothing uncontrolled or in any way in contrast to the perfection of the very prudent and holy Virgin; there was nothing possibly untimely or inappropriate in the outward manifestation that merited a warning from Jesus.

Unlike Magdalene, the Virgin kept her Faith intact and therefore the glorious appearance of her Son did not provoke that stupor and surprise which so easily overwhelms our imperfect human nature.

What splendour of virtue in Mary, both in the abyss of humility at the manger and in the ocean of sorrow at the foot of the Cross, and in the boundless joy before the glorious Jesus!

What interior and exterior domination of her whole being, thanks to the one movement that animated her Heart: the divine will and divine love!

Moral Questions About the Creation of Biological Chimeras

New Tightening of the Asset Management of the Holy See

Chile: A Step Towards the Abyss