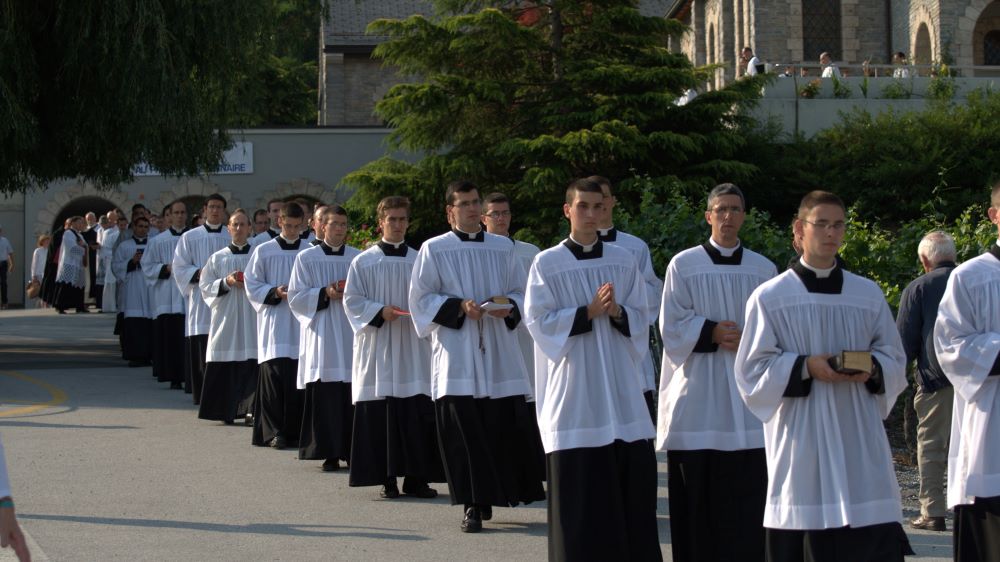 “After years of purgatory, the cassock is back. ‘During the continuing formation sessions of my ecclesiastical province [Rouen], there were two of us wearing it in 2014. Today there are around ten, or half of the participants,’ remarks Fr. Laurent Gastineau, who was ordained a priest four years ago in the diocese of Séez.”

“A phenomenon confirmed by the Arte Houssard company, a manufacturer of made-to-measure cassocks, which saw its sales increase by 145% between 1999 and 2016. ‘We have always had customers, mainly tradis, to which can be added today the new generation of priests who want to have one, even if they don’t wear it every day,’ says Stéphanie, the manager of the Parisian store.”

Why not be satisfied with the clergyman [priest’s suit], we ask these young priests? Here are their responses reported by the weekly: The clergyman only speaks to Catholics, remarks Fr. Marc-Olivier de Vaugiraud, 38, former vicar in Yvelines. In addition, the cassock is more visible. If I put on the fascia, they continue to see it. I am twice as likely to be stopped when I wear it! ”

“The same goes for Fr. Gastineau, who claims to be, in a cassock, certain of ‘not traveling alone on the train,’ and remembers crossing Paris being made exhausting by a deluge of requests. ‘I understand that some people want to take it off for peace of mind!’ he jokes. Some passers-by do not hesitate to ask for blessings, prayers, how to receive baptism, or make his first communion.”

Several priests also note that visibility equates to availability. Vicar of the Basilica of Argenteuil (Val-d’Oise), Fr. David Lamballe reports that several times he has been asked to hear a confession in the street or in the metro: “When I have to move from one place to another, I am careful to make broad plans because I know that I will be called upon. For people, the cassock means that I am ‘on duty,’ at their disposal.”

Far from the pastoral burial by the post-Council, the cassock is considered a good means of evangelization: “In an increasingly secularized society, the cassock plays its role as a sign that there is a another reality,” says Don Louis-Hervé Guiny of the Community of St. Martin. “It encourages people to ask questions and make contact. ”

“In Mantes-la-Jolie, Fr. de Vaugiraud regularly experiences the missionary dimension of his long black robe. Entering a bar one day in front of which he had passed a few minutes earlier, the boss told him that his cassock had provoked a discussion among the customers.”

“The good Lord stepped into their conversation. We have spoken at length about charity, about the love of Christ. This piece of cloth, which the Franciscans of the Bronx call a ‘silent homily,’ allowed me to introduce the name of Jesus into a heart. I’m the good Lord’s walking billboard!” he concludes.

Famille chrétienne quotes a revealing fact: “Fr. Gastineau remembers that when he was at the seminary, it was ‘unthinkable’ for future priests to wear ecclesiastical clothing (they had the obligation to be in civilian clothes), but everyone hid a cassock in their closet.”

“We wore it outside after changing our clothes in hiding. Even if that’s not the main reason, I think we probably also adopted it as a reaction to a generation of priests with whom we could not identify,” he confesses.

“Choosing the cassock corresponds to a certain vision of the world and of the Church,” analyzes Fr. de Vaugiraud. At one time, some thought it was an obstacle to their apostolate. Today, many young priests see it as their best ally in a de-Christianized society.

“Unconvinced by the experience of the leaven in the dough [which served as justification for the post-conciliar burial], they have opted to be a ‘light of the world.’ ‘But be careful, being in a cassock does not mean that you are more holy. And before deciding whether to wear it or not, what matters is knowing what kind of man will put it on,” concludes Fr. de Vaugiraud.

In fact, it is a whole spiritual and doctrinal content that the cassock must express, as Archbishop Marcel Lefebvre taught his seminarians in 1970. The clothing form is the reflection of a philosophical and theological training which draws on the two-thousand-year-old treasure of the Church. The ecclesiastical habit is not a step backwards, but a return to tradition.