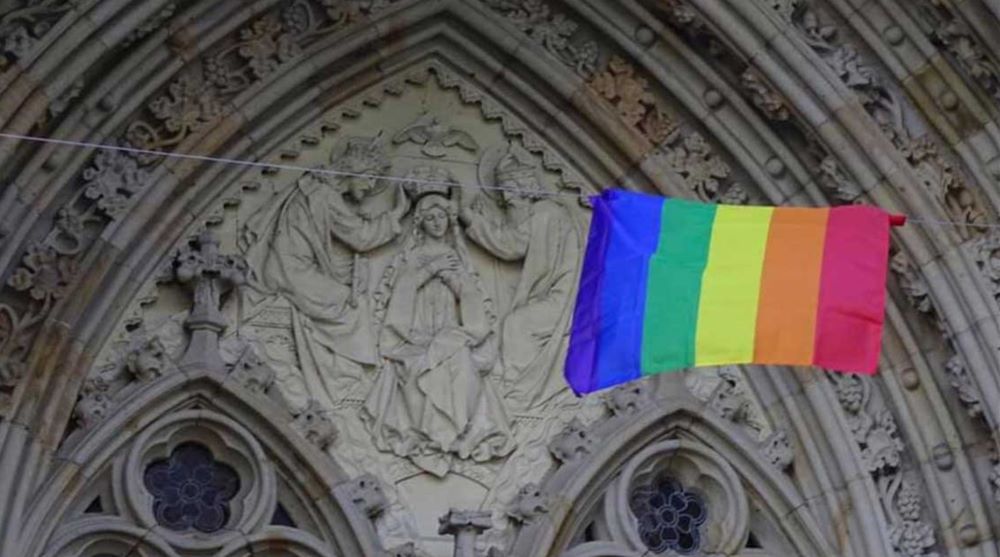 Defying Roman authority, many priests chose to display a rainbow flag [LGBT movement colors] at the foot of the altar during the events, and announced that this day was just the beginning a practice that will become a daily one when couples request it.

These priests knew there was no risk of sanctions. Two bishops, Bishop Helmut Dieser of Aachen and Bishop Franz-Josef Overbeck of Essen, have left the priests of their dioceses free to decide “according to their consciousness” whether to participate or not in these collective blessings.

For his part, Msgr. Georg Bätzing, President of the Episcopal Conference of Germany, has distanced himself from this initiative, but more on form than on merit: he had hoped that the question would be discussed in the more appropriate place, namely the synodal path …the place  where such questions as intercommunion with Protestants, priestly celibacy, and the opening of the ministries to women, are being currently discussed.

At the Roman level, there has been no reaction to this provocation launched against the Congregation for the Faith. Stefano Fontana in the New Daily Compass of May 10, predicts without difficulty: “The feeling is that nothing will happen, [doctrinal] misunderstandings will continue and schismatic practices will be implemented.”

“For the record, the two documents in question are the exhortations Evangelii Gaudium and Amoris laetitia. Now, it would seem rather strange that the Pope, who wishes to decentralise doctrinal competences, should then block the processes desired by those Bishops’ Conferences, as is the case in Germany.”

And summarizing the situation: “The bishops promote schismatic processes but do not make them official; the pope says in his interviews that he does not fear a schism and accuses his so-called ‘rigid’ Catholics of crypto-schism; he has condoned a schism like that of the official Chinese church; and he is evasive and reticent on schism-prone topics in Germany.”

“Nothing will happen after May 10. The bishops, after having openly promoted those same ideas, will however say that it was an unofficial grassroots initiative. The pope will not intervene because the Congregation has already taken care of that.”

“The Synodal Path will continue to be misunderstood, and in the meantime de facto schismatic practices will be implemented, which the synod’s final document will not confirm, but neither will it condemn. The German Church will no longer be the same, but no one will have said so officially.”

“Then it will spread. National synods will multiply – including, unfortunately, the Italian one – and the same thing will happen there: doing without saying. Doctrine will be set aside, but the person who set it aside will never be found.”

As of April 26, on his blog, the vaticanist Marco Tosatti reported an element explaining this facto schism in Germany. It is not a theological or canonical analysis, but a fiscal perspective that for being merely material is none the less enlightening.

He writes, “In Germany there is a tax for the Church (Kirchensteuer), deduced, with authorization, from the salary of the person concerned. Through this tax, essentially, the faithful have access to the sacraments and can receive them. If an individual does not pay this tax, he is not only refused the sacraments, but also a religious funeral, for example.”

“These are the fruits of the Church in Germany, one of the richest in all of Europe and the world: a German priest receives an average of 2,500 € per month in salary. This is not a lie. Not to mention reimbursements of travel expenses. We can thus confidently arrive at an amount of 3,000 € per month.”

[As a comparison: an Italian priest with dozens of year of service may receive 1,200 € per month. In France, a diocesan priest receives about 950 €, with free room and board and travel allowances. NDA and NDT]

But, “Let’s get back to the Church in Germany, which, in recent decades, has experienced a significant decline in its ‘members,’ with a subsequent decline in its income. The binomial fewer inscribed-less income is understandable with a very simple example: take the case of a divorced man who has contracted a second civil marriage and who, according to the practice of the Holy Roman Church, does not have access to the sacraments. What sense is there for this man to pay the above-mentioned tax?”

“Let’s take a second example: a homosexual couple asks to be officially blessed by a priest, at a public ceremony, to show that God blesses their union. If the Church’s response is negative, will both partners pay this tax?”

“I think it is logically understandable what the reason is for this sharp drop in ‘members’ and the resulting descending curve of revenue.” [Note: in less than ten years, the official numbers of the Church in Germany fell to 22.6 million in 2019, or 2 million less than in 2010. NDLR]

“What does the German Church do to remedy this situation? It mobilizes forces, people, ideas. It insists, decrees synods, to make it possible to allow, without any condition, communion to the remarried divorced, the blessing of homosexual couples, etc. Is the motive or intention really to support those who feel ‘marginalized’ by the Church? Or would it be to compensate for financial losses?”

“I do not know them individually, but basically, I suspect that this substantial group of bishops, priests, deacons, does not really have at heart the salvation of the sheep that the good God has entrusted to them. They act like mercenaries. I see [among them] great interest in their portfolios.”

This financial aspect is not without interest, on a complementary basis. It cannot prevent the root causes of this de facto schism, which are doctrinal, as already shown by the Würzburg Synod which was held between 1971 and 1975.

Précédent : United States: A Tribute to the Reconstruction of Notre Dame de Paris
Suivant : Ordinations to the Priesthood and Diaconate – Zaitzkofen, June 26, 2021