Dernières nouvelles
Accueil » Histoire » He spoke to my heart He spoke to my heart 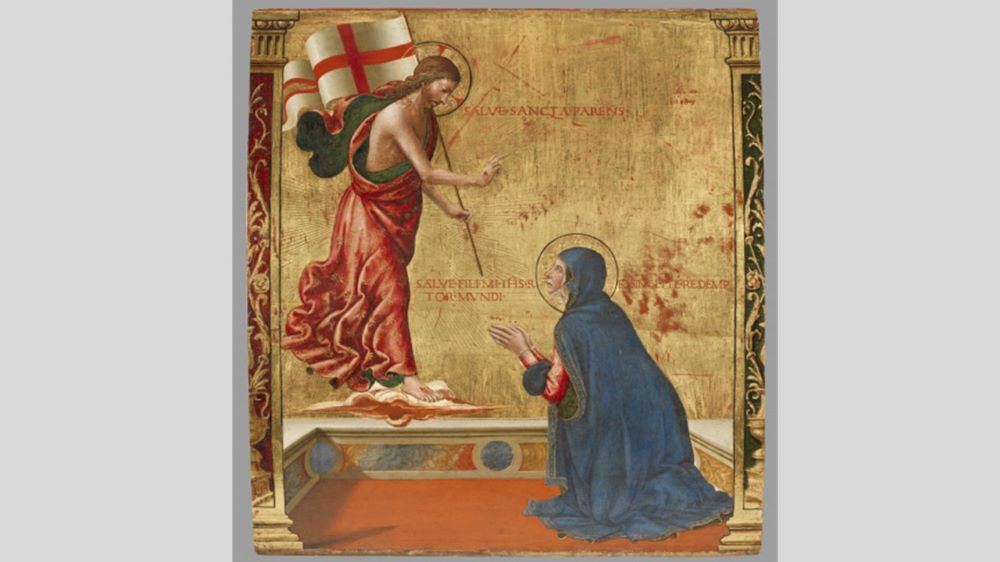 Reflections of Jean-Jacques Olier on the Resurrection.

She had given him a human body, a body that could endure suffering, a humanity that had the capacity to save all men, and now this Body returns to her but glorious, impassive, immortal.

She discovers the glorious wounds of Its hands and feet and immerses herself in the contemplation of this open side. She hears the glorious palpitations of this Sacred Heart to which she adds all her joy and love.

This Son, so loving, comes to pay her filial homage as before, but He adds a splendour that she did not yet know. He gives himself gloriously.

She had given Him a body for love of Him and to save souls, and now, for love of her, He came to give it back to her. The only one to triumph over death placed in her hands all power over His Sacred Heart so that she could plunge into It the souls that had become her share and her inheritance.

It was by this last will and testament, contracted at the foot of the Cross and signed with His Blood, that Jesus had chosen her as heiress of souls. And now, in the glory of His Risen Body, He opened the centuries to come before her so that she could pour out the torrents of His mercy and freely use the rights He had bequeathed her over souls.

Mr. Olier writes: “During His visit to the Virgin Mary after His resurrection, Jesus communicated all the dispositions and feelings of His soul to His Holy Mother. He especially expressed to her the ardent desires which urged Him to go at last to be reunited with God His Father, to praise and glorify Him in Heaven.”

How ardently He desired to present Himself before the Creator as a new Adam, renewed, transfigured and fully in harmony with the infinite love from which He had come. Through His glorious Body, Christ bears witness to the fact that the whole of humanity once again has access to the path of return to the Creator.

Monsieur Olier goes on to reveal to us the feelings of Mary, “who for her part felt a vehement desire to accompany her Son there, to unite herself to His praise; and no doubt she would have ended her life and followed Him into Heaven, if He had not wanted to make use of her to help the Church in her beginnings.”

Indeed, the work of this divine Mother was still incomplete. After having given birth to the Head through Mary, God wanted to procure, through her, the formation of the whole body. He wanted to make her the mother of His entire family, of Jesus Christ and of all His adopted children.

“Out of zeal for the glory of God and out of charity for us, she joyfully accepts the commission which Our Lord leaves her to work to make His Father honoured by men, and to remain on earth until the Church has been well established.”

Thus, this tender Mother was so well established in the Divine Will that she immediately adjusted her intention and the vehemence of her desires to direct them to the unheard-of needs of the apostles of the last times. Her desires for the glory of the Father through men were so powerful that she reaches out to us every day across the centuries to strengthen us in the Faith during this terrible agony of the Mystical Body of Christ, and “speak to our hearts”.