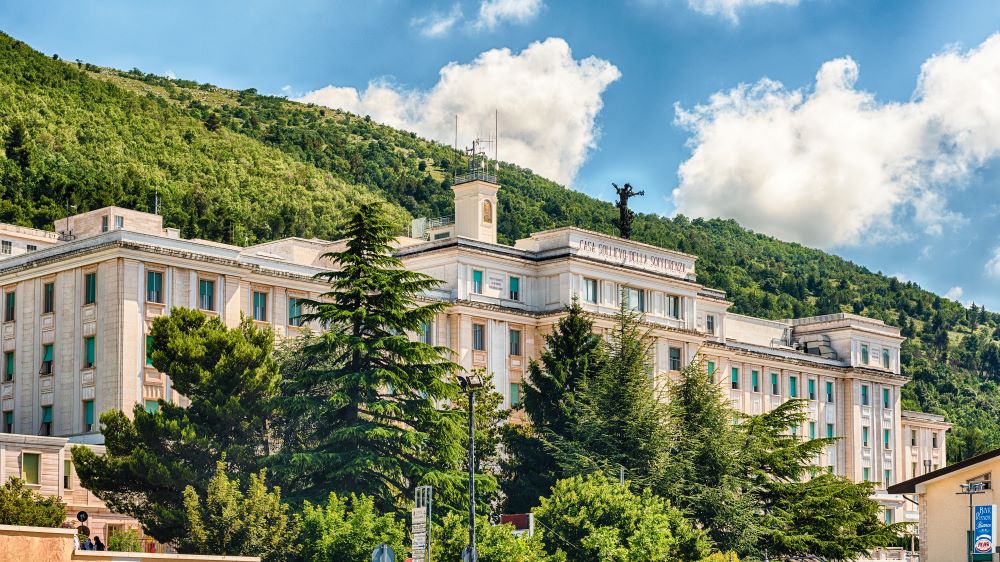 The care facility founded by Padre Pio is up against the wall: deficits and debts have been piling up for several years, not to mention the earthquake caused by SARS-Cov-2. The Vatican is trying to find a solution in order to save the work of the illustrious Capuchin.

An arid and desolate plateau—that is what San Giovanni Rotondo looked like before Padre Pio set about what would be his life’s work: the clinic of the Casa Sollievo della Sofferenza – the Home for the Relief of Suffering – which has since become the largest and most modern hospital of the Italian Mezzogiorno.

It was on January 25, 1925 that the illustrious Capuchin inaugurated what was at first a rather modest care establishment – the St. Francis civil hospital – installed in the former convent of the Poor Clares: two rooms with seven beds each, and two reserved rooms; the poor were cared for free of charge.

It was a work that fizzled out, because thirteen years later, in 1938, an earthquake destroyed the hospital: the ways of the Lord are decidedly impenetrable, the Capuchin saint must have said to himself …

But it took much more to discourage Padre Pio: it was on the evening of January 9, 1940, in his cell, that he came up with the idea of ​​the Home for the Relief of Suffering. But it was not until May 16, 1947, after World War II, that the first stone of the “Cathedral of Charity,” as it is sometimes called, was blessed.

In the 21st century, after four successive expansions – and a fifth pending – the hospital founded by Padre Pio has become an imposing building with 1,200 beds, five operating theaters, and equipped with the most modern infrastructure.

The establishment – a hive of activity in which 2,500 employees work – still has no equivalent in all of southern Italy, and remains the most famous of the Peninsula. The most recognized members of the medical profession south of the Alps come one after the other to head the various departments.

Enjoying the status of regional hospital guaranteed to it by the Ministry of Health, the Home for the Relief of Suffering nevertheless retains its legal and administrative autonomy. As property of the Holy See, as provided in Padre Pio’s will, it is managed by a commission piloted by the Vatican.

If the 2000s saw a deterioration in the economic situation of the hospital, it is in fact Covid-19 that could deal the fatal blow. The 2020 budget has indeed ended in nearly fifty million euros of loss.

And the institution’s indebtedness could exceed a hundred million, even if it is more suitable to speak in the conditional, because the Vatican is not in the habit of disclosing its accounts.

At the end of March 2021, the bishops of Puglia met with the president of the region, Michele Emiliano, who announced that he himself had spoken by videoconference with the Secretary of State of the Holy See, Cardinal Pietro Parolin.

The latter may consider appointing a commissioner to replace the current director general, Michele Giuliani: the Holy See wishes to find a person with a background capable of playing the role of credible interlocutor with the Chigi Palace, seat of the Italian government, with the aim of  obtaining extraordinary funding along the lines of that guaranteed each year to the Bambino Gesu.

Précédent : Revelations From the Sri Lankan Government About the 2019 Easter Attacks
Suivant : London and Belfast Cross Swords Over Abortion

Moral Questions About the Creation of Biological Chimeras

New Tightening of the Asset Management of the Holy See

Chile: A Step Towards the Abyss