Dernières nouvelles
Accueil » Histoire » Poland: Restoration of One of the Largest Altarpieces in the World 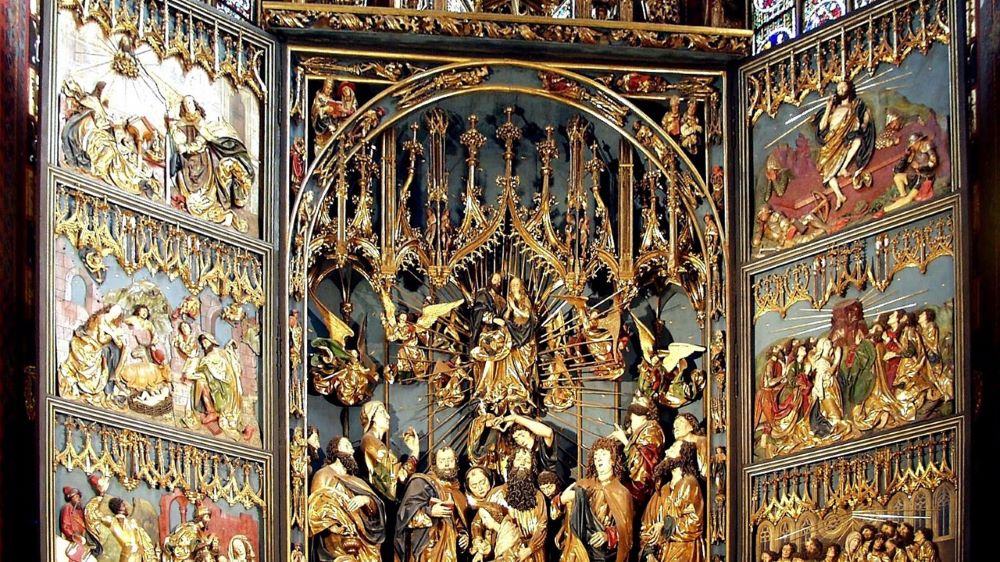 One of the largest altarpieces in Christendom is in Krakow, Poland, and dates from the late Middle Ages. Witness to the eventful existence of the city founded on the banks of the Vistula, it has just been restored and shines again with its thousand lights.

In the heart of the Polish capital, on the city’s main square – the Rynek Glowny – St. Mary’s Basilica, Mariacki Kosciol, stands proudly with its two asymmetrical towers.

The church, which impresses visitors with the height of its vaults, is especially famous for its altarpiece, one of the largest in the Christian world, along with that of the Cathedral of Seville.

Between 1477 and 1489, a Nuremberg sculptor named Stoss living in Krakow, known in Poland as Wit Stwosz, designed the altarpiece as a thirteen by eleven meter pentaptych: a central panel with sculptures, a pair of internal wings that open, and another pair of fixed outer wings.

The work mixes the species of oak and larch, with linden wood carvings reaching nearly three meters in height.

Housing more than two hundred sculpted figures, the altarpiece recounts the main episodes in the life of Our Lord and of His holy Mother: the central scene evokes the Dormition and Assumption of Mary in the presence of the Twelve Apostles. Above the main panel is a depiction of the coronation of Mary, flanked by Saints Stanislaus and Adalbert of Prague.

When the altarpiece is closed, panels showing other scenes from the life of Christ and the Virgin Mary are visible.

On the eve of the Second World War, when Poland felt its existence threatened by Nazi Germany, the inhabitants dismantled the altarpiece as a precaution, and dispersed it in pieces, to several places of the country.

During the occupation, on the orders of the Nazi Governor General Hans Frank, a group of SS investigated, got hold of the parts and shipped them to Germany where they were stored in Nuremberg Castle, a symbolic city of the Nazi Party. An operation led by resistance fighters towards the end of the war, would bring the altarpiece back to its town of origin.

But the masterpiece has suffered the ravages of time: an thorough assessment, carried out in 2011-2012, concluded that a restoration was necessary, using cutting-edge digital techniques.

Begun in 2015, the work was completed at the beginning of 2021, and has made it possible to discover that the main group of sculptures of the altarpiece had been carried out in 1486, that is to say three years earlier than what had heretofore been estimated.

On this occasion, Msgr. Dariusz Ras, rector of the basilica declared: “this altar is obviously a cultural heritage, but for us, believers, it first and foremost presents the most beautiful moments of the life of Mary, which we know from the Gospels.”

A Mass will be celebrated in thanksgiving for the restoration of the altarpiece on August 15, 2021, the patronal feast of the Mariacki Kosciol, dear to the hearts of Cracovians.

Précédent : In Vitro Fertilization and the Moscow Patriarchate
Suivant : United States: The Koran in the Delaware State House of Representatives