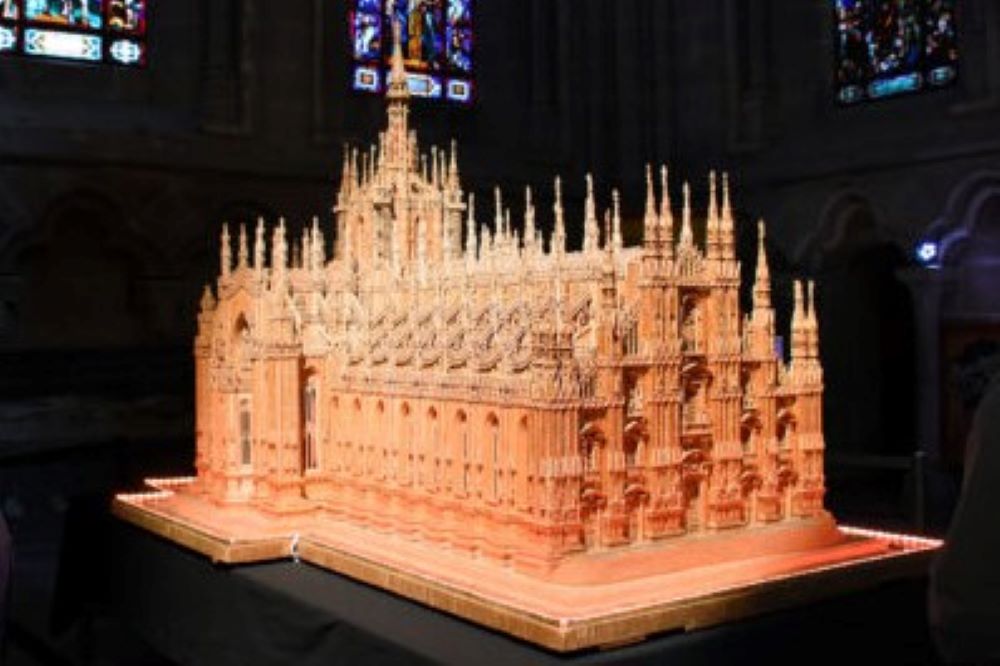 Since May 13, 2021, Lausanne Cathedral has hosted the exhibition “Gothic! The Time of the Great Cathedrals.” Around twenty 1/200th scale cathedrals by artist Luciano Xavier dos Santos are being displayed along the ambulatory of the Gothic Notre-Dame Cathedral in Lausanne.

Born in 1985 in Brazil, Luciano Xavier dos Santos trained as an architectural designer and graduated from the Ecole des Beaux-Arts in Paris. It was when he arrived in France, says Le Nouvelliste, that he developed a passion for cathedrals.

“I fell in love with Gothic art, obviously for the architecture of cathedrals, but also for the universe around them, and their importance to Christians.”

Established in Fribourg since 2014, Luciano Xavier built his first model – Notre-Dame de Paris – in 2016. He needed two months of work to test the different materials and check their resistance.

He opted for cardboard and wood. The structure and surfaces are made of cardboard. And the detail elements in matches, skewers, and toothpicks. “The hardest parts are the facades. They must be faithful and recognizable at first glance,” says the artist.

“The Cathedrals of the Nativity of the Virgin Mary in Milan and St. Peter’s in Cologne are the ones that required the most effort, with the numbers of flying buttresses and statues. The Cathedral of Notre-Dame d’Amiens is my favorite. But all of them have a particular history, from the day I visited them until they were finished,” says Luciano Xavier dos Santos.

“It takes time to get a job done, unlike our times when everything is immediate. Next to this exhibit are two Lego models “Notre-Dame de Lego,” built by Patrick Graber.

Also, one can admire a Duomo of Milan installed in the south transept of the cathedral. This monumental work by Albert Schenk was presented in 1958 at the 39th Comptoir suisse in Lausanne.

The Feuille d’Avis of Valais then gave the description: “This Milan Cathedral, reproduced with rigorous fidelity in a to-scale monument, 3.20 m long, 1.85 m wide, and 2.20 m high, required twenty years of work.

“All the details of the monument are reproduced: flying buttresses, battlements and crenellations, the main facade and its sumptuous treasures, aisles and apses, rosettes, the great tower and its bells, and at the top of the cathedral’s spire, the statue of the Virgin, carved from a block of 60 matches, surmounted by a luminous crown, holding the papal cross in her right hand. This incomparable masterpiece is illuminated by 6,120 lamps…. In short, a vision of the impossible come true.”

Luciano Xavier dos Santos will continue with his traveling exhibit. In autumn 2021 – from September 27 to October 10 – he will visit the Abbey of Saint-Maurice d ‘Agaune in the Valais, Switzerland. He was commissioned to make a model of the Abbey by the Bourgeoisie de Saint-Maurice. In 2022, he will be in Beauvais, France, and possibly Cologne, Germany.

Précédent : The Holy See Gives Up on the China Case

United States: A Tribute to the Reconstruction of Notre Dame de Paris

Switzerland: A Church at the School of the World