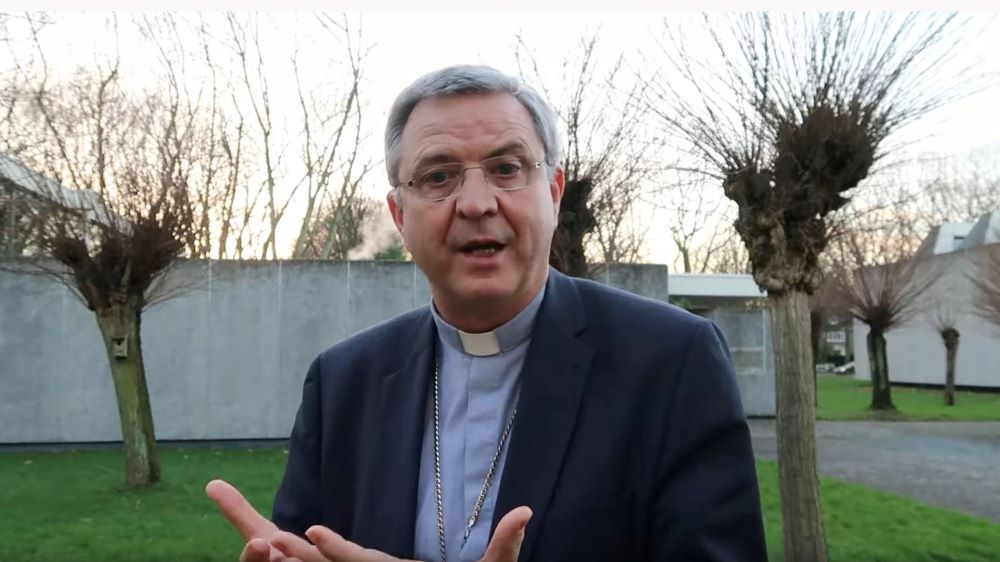 Several speakers were invited to this virtual round table, particularly the bishop of Antwerp, Msgr. Johann Bonny, who had already distinguished himself by voicing an indignant reaction against the text of the CDF, and by a mea culpa struck on the chest of the Church for the benefit of the couples mentioned above.

Departures from the Church

Msgr. Bonny extends his indictment against Rome in several ways. First, he says that “mainly straight” people, especially young people, reacted in a “dramatic” way, by officially leaving the Catholic Church in his diocese in protest against the actions of the CDF. They are said to number around 700.

He added that as many as 2,000 people have requested the cancellation of their registration in the baptismal registers in the Flemish dioceses of Belgium. Adding that it was a traditionally very Catholic region.

Note that what we have here is an indirect admission of size. It is certain that Flanders was a very Catholic country. But the succession of progressive, even very progressive bishops, has made it a region which is no longer truly Catholic.

The practical cost of this situation, adds the prelate, is the loss of the faith of the members of the Church. “It’s not about principles or theories—it is about real people and that is my concern. That is our responsibility in fron of God our Father,” he said.

He is not wrong about his responsibility, but his indignant reaction against the CDF is at the forefront of the decision of these poor sheep lost by their pastors, and by him in particular.

A Scathing Criticism of Responsum

The Bishop of Antwerp takes up his denigration of the Responsum from several angles. He first criticizes the lack of consultation with the bishops. When he attended the Synods on the Family in Rome, he called for the Church to offer blessings to same-sex couples. He asks himself: How can the Church move forward in these questions without synodal collegiality?

The second big flaw in this text is that it is “not in tune with Amoris Laetitia at all.” The apostolic exhortation emphasizes looking to the positive elements and not condemning people before you talk to them, he says. The poison of this text has not finished poisoning the Church.

The third flaw: a theological weakness of the document such that it does not reflect recent developments in biblical, sacramental, and moral theology. And to make his point clearly understood, he asserts: “It is as if it was written in the time of Pius XII.” There is probably a no more serious insult that could come from the mouth of this prelate.

Msgr. Bonny discerns a fourth flaw: the fact that the document does not take into account what the human sciences say about sexuality and developments in civil society. In particular, the fact that many countries have legalized civil partnerships for LGBT couples, and this fact is part of the experience of many Catholic families.

We find an assertion also present among German theologians and bishops on the subject: modern sciences and social evolution are sources of revelation. What about the backward poor who affirm, with all of tradition, that revelation closed with the death of the last Apostle, and that nothing can be added to it?

The fifth flaw: the Responsum affirms with Amoris Laetitia that “there are absolutely no grounds for considering homosexual unions to be in any way similar or even remotely analogous to God’s plan for marriage and the family” (no. 251). This passage is a quote taken from the CDF’s document: Considerations about the projects for legal recognition of unions between homosexual persons, from June 3, 2003, at no. 4.

Msgr. Bonny is indignant at such recourse to his text-cult. “Already in the synod, it was said that this is not true. There are plenty of similarities. Nobody says it is the same; it is not the same. And there are indeed major differences. But to say that there are no possible similarities or analogies, not even the slightest, is not true. So, it’s repeating something that everyone knows is not true.”

But there is nothing to do, the text is indeed a quote from Amoris Laetitia which quotes an earlier text. So who should we believe: the papal exhortation, or the private words of Msgr. Bonny?

Finally, after having recommended seeking pastoral and liturgical solutions to the problem in question, the Bishop of Antwerp affirms that “the Catechism is not of divine right, it can be changed by the Pope.” He compares: “The catechism can change, just like canon law.” He even specifies: “The catechism is a book that is open to historicity and progress. I think there are paragraphs, which in a collegial way, could be changed.”

A fine admission, but we already suspected that. For Bishop Bonny, divine faith is evolving. It must follow the will of men, whether it is the civil lawgiver who vindicates sin, or the lost shepherds who lead their sheep to poisoned pastures. Their responsibility, especially that of the bishops, is frightening.