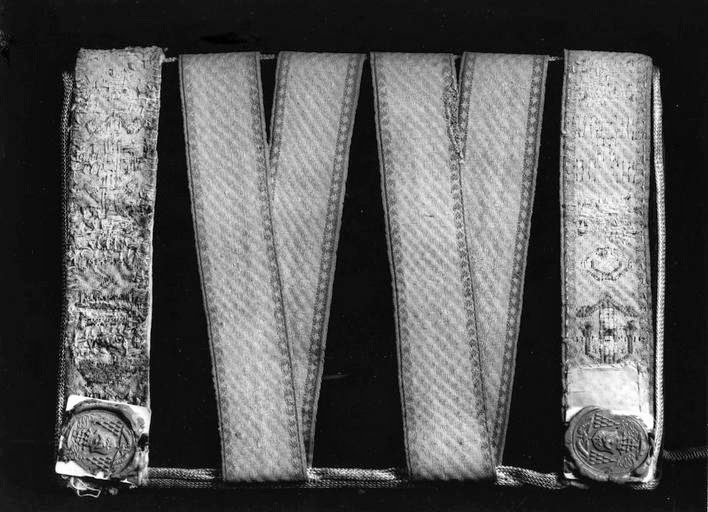 A 34-page book, illustrated with original watercolors, with brief comments, was published in 2018 by Editions de l’Hotel de Sancé, entitled La garde-robe de la Sainte Vierge. The object of the work is the apparitions of the Blessed Virgin and the various dresses she wears for these occasions.

The subject is developed in several articles by Fr. Etienne Beauvais in Le Petit Grégoire, the parish review of the Church of Saint-Grégoire des Minimes, in Tours.

In the margin of the first article, the acquisition of Our Lady’s belt, venerated in the Saint-Ours church in Loches, in Indre-et-Loire, is told. Loches was ceded to France in 1249. St. Louis bought it from one of the heirs of Drocon or Dreux de Mello. The sale was signed at the Egypt camp.

Long before this date, Loches possessed a precious treasure, conquered by one of his lords, Geoffroy, count of Anjou, known as Grise-Gonelle, because of the gray color of his armor. This conquest is a curious story that we borrow from a small notice, printed with permission from the Archbishop of Tours.

“In 978, Geoffroy Grise-Gonelle having agreed to fight one-on-one against a German prince who was disputing with King Lothaire, son of Louis IV of Outremer, his rights to the crown of France, Queen Emma, ​​close relative of Count of Anjou, sent him, for protection, the belt of the Blessed Virgin, preserved in the chapel of her palace.”

“She advised him to wear it with him during the fight, assuring him that the Virgin Mary, to whom this belt had belonged, would bring him victory. This is what happened. The King and the Queen, after Geoffroy’s victory assured them the quiet possession of the throne, gave him the precious relic, which he hastened to deposit in his church at the castle of Loches, where almost all our kings visited.”

“Each year it was exhibited for public veneration on May 3 and August 15; on those days people flocked to the collegiate church, and in its ranks were often seen people illustrious by birth or holiness, such as Blessed Jeanne de Maillé. For the rest of the year, the holy belt was carefully enclosed in a double-door cabinet, lined with iron and fitted with five locks.”

“The belt of the Blessed Virgin is of a very fine fabric, of hazelnut color, the material of which is probably linen. It is two meters ten centimeters long, and about three centimeters wide. Before the Revolution , it was kept in a rich vermeil reliquary, modeled on the Church of the Holy Sepulcher in Jerusalem. It rested on an agate of rare beauty, enriched with precious stones and gold.

“When the revolutionaries came to plunder the collegiate church, the rich reliquary that contained the belt tempted their greed; so they stole it; but the holy relic was saved from their sacrilegious hands by Fr. Pierre-René Leduc.”

“In 1803, it was brought back to the castle church and on August 7 was solemnly accepted by the former canons and chaplains of the collegiate church. In 1834, Msgr. de Montblanc, Archbishop of Tours, allowed it to be exposed, as in the past, for the veneration of the faithful. It is now placed on a cushion of cloth of gold, to which it has been firmly fixed by ties bearing the archepiscopal seal, and enclosed in a Gothic reliquary.”

This belt was brought to Constantinople by Emperor Arcadius, who gave it to his sister, St. Pulcheria. In Constantinople, devotion to this relic became so popular that Emmanuel Komnenos established a feast in its honor.

Offered to Charlemagne at the same time as the veil of the Blessed Virgin, which Charles the Bald inherited and venerated in Chartres Cathedral, Mary’s belt remained royal property until Geoffroy received it as a reward.

Since 1252, a documented fragment of Our Lady’s belt has also been located in the Church of Our Lady of Deliverance in Quintin, Brittany, as well as in the collegiate church of Puy-Notre-Dame, in Maine-et-Loire.