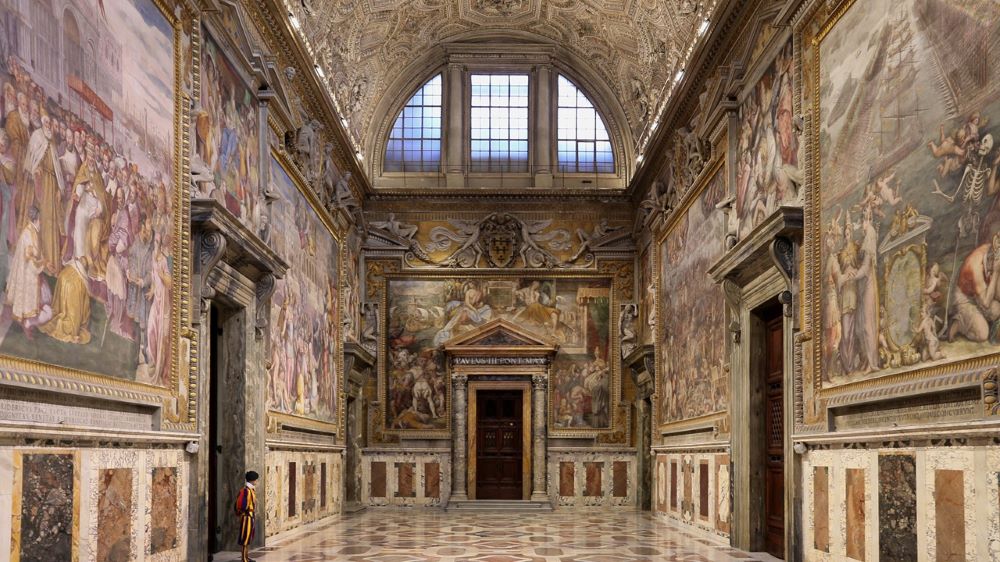 Malicious tongues will say that the difference between Venice and the Vatican is that the Venetian city takes water from the ground, while the Holy See receives it from the ceiling.

Because there is an urgent need: water seepage has damaged a large section of the top of the wall of the Sobieski Room, located in the Borgia Tower. This piece owes its name to the enormous painting which depicts the victory of Polish King John III Sobieski over the Turks at the end of the Battle of Vienna (1683).

From there one can enter the Hall of the Immaculate Conception, where the fresco by Francesco Podesti is located which, in turn, leads into the sumptuous apartments of Julius II, decorated by Raphael.

But as with trains, one disaster can hide another: in the Vatican, they have not yet recovered from the recent fall of fragments of stucco, detached from the ceiling of the famous Sala Regia, formed by a barrel vault painted in fresco by Vasari. When one considers that this is where the Roman Pontiff receives his most illustrious visitors …

The water damage has affected other rooms. A few months ago, “leaked” videos, showed new water seepages in the part of the museums where Roman statuary is exhibited. Caesar stands with his feet in the water: the height of irony for those who once crossed the Rubicon!

We could also mention the halt to the restoration of the Cortile della Pigna [courtyard of the pinecone]: the work, which began in 2015, consisted of refreshing the paintings.

Alas! An unforeseen chemical reaction with the old mortar occurred, catalyzed by humidity: as a result, for several months, the new layer of color has been peeling off.

Finally, to make matters worse, last January, two pieces of travertine suddenly detached from the cornice adorning the courtyard of the Pinacoteca, and crashed to the ground, where many visitors usually wander: the museums being closed probably avoided a tragedy.

So many episodes that have pushed the Secretary of State to intervene as quickly as possible, with discretion, because no one in the Vatican wants to dwell on the situation: a battalion of experts has been dispatched and external scaffolding hastily constructed.

Apparently, it was all due to excess stagnant moisture having damaged the timber frame. The same that has supported, for several centuries, the ceilings of the Apostolic Palace, the seat of government of the Roman Church.

A race against time then began, in order to secure as a priority the parts of the palaces that visitors can browse since May 3, 2021 is the date of the reopening of the Pontifical Museums.

In the Vatican, some would see a dark omen for the state of the Church. Either way, the facts are there: Apostolic palaces are everywhere taking on water. Emotions are running high in the Vatican, as Il Messagero mentions in its edition of April 21, 2021.